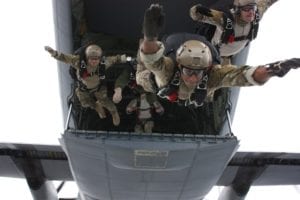 Today we put the spotlight on the US Marine Corps, most known for their elite skills and ability to execute combined-arms task forces in a wide variety of combat situations.

The Marines are often known for their amphibious capabilities, but you might be surprised to know their first successful amphibious mission was completed during a weapons ambush on the British! Only weeks after being formed, the USMC was well on its way to becoming a well-oiled, well-trained, fighting, defending machine. Keeping with its dedication to best-in-the-world practices, soldiers of the Marines train regularly with counterparts from a variety of other countries around the world.

So here’s a salute to these dedicated, specialized soldiers; you’ll want to thank a Marine next time you meet one.