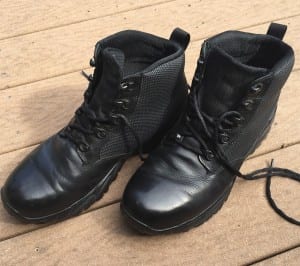 Picture of my ALTAI™ boots after SWAT training.
(Click To Enlarge)

In the late winter of 2014 I was introduced to a new pair of your short black duty boots. Although at the time I never heard of the ALTAI™ brand, I decided to give the boots a try because they had the features I was looking for…comfortable, lightweight, warm and dry. As a Police Commander, I spend more time in the office than out in the field. I didn’t want my feet to get cold in the harsh temperatures of the winter and I also didn’t want to lug around heavy boots that my feet sweated in while in the office. And I sure didn’t want to change my footwear every time I decided to head out in the field.

When I first tried the boots on, they conformed to my feet so well that I felt as if they had been broken in for months.

I also really liked the laces. While the boots have the speed lacing system, the laces themselves have a unique flex design. I’m one of those that if I don’t double tie, I’m always re-tying my laces. I’m not sure the science to how these laces were made, but I have never had to double-tie nor re-tie them.

After several months of wearing these boots they still looked brand new. The salts from the icy winter roads didn’t turn my boots white like it did my last name brand pair. The SuperFabric uppers repelled everything as did the sides of the soles. My feet always stayed warm while out in the cold and they were never sweaty at the end of a long day in the office. They definitely lived up to the advertised trait of being “breathable”.

While I was very satisfied with the boots after six months of use, as an office person I knew I haven’t really given them the true test. That changed a couple weeks ago when I got the opportunity to participate in a very intensive week long tactical SWAT training school with a bunch of new SWAT officers. The week including running and doing calisthenics every day, climbing steps with heavy equipment, running over glass from shattered windows, and participating in a several hour long active shooter situation in a swampy and heavily wooded area while in the rain.

I had my ALTAIs on every day all day. During the runs and calisthenics, the boots were so light and comfortable I felt as if I was wearing tennis shoes. At the same time my partners seemed to be exhausted as I watched them slap their heavy boots on the pavement with every step. While running over glass and climbing ladders, my feet were very well protected with the thick soles, strong support and SuperFabric uppers.

The day we conducted our wooded search was the day that sealed my great respect for these boots. The woods were boggy and thick with brush, logs and dead tree stumps. It was raining all day, which made the boggy ground saturated so much that I could often hear the suction underneath my feet with each step. Sometimes I walked in two to four inch water including crossing a shallow creek. Mud built up on the boots to such an extent that I had to scrape them against logs to get it off.

When the day came to an end we were exhausted. I looked down at my muddy feet and I was convinced that I had just destroyed my boots. I saw a couple of my partners take their boots off and wring out their socks. Their feet were white and shriveled. Since I still had my rain pants on, I decided to wash my boots off with a high pressure water hose while still on my feet. As I did so, my boots came back to life. I was able to flush every piece of mud and dirt from them. When I took them off, I was extremely amazed to find out that my socks and feet were completely dry. I am here to tell you that I am 100% convinced that these boots are incredibly WATERPROOF!!!

I wish I would have taken a picture of my boots after coming out of the marsh that day. Unfortunately I was exhausted and never thought of it.

When I got back to my office job the following week, I spent no more than five minutes putting a quick coat of polish on the sides and toes. The SuperFabric uppers didn’t need it. They again look like new, which you can attest to from the attached picture. They look so great that as a Commander I have since worn them to three ceremonies in my Class A uniform.

I am not one who normally takes the time to write a review, however I was so impressed with these boots that I just wanted to THANK YOU for producing such awesome product. I hope to wear these boots to the end of my career.

Thanks much,
A Veteran Police Commander from the Midwest